H. Patrick Haggard was sworn in as a Superior Court Judge in 2011. Prior to becoming a Superior Court Judge, he practiced law in Athens and the surrounding areas in both civil and criminal matters, was a certified mediator and served on the State of Georgia Courts Automation Commission. He also served as the Municipal Court Judge for the City of Winterville from 1992-2011.

Judge Haggard is married to Beth Haggard. They have three children and one grandchild.  He is active in Athens First United Methodist Church and Oconee County Rotary Club. 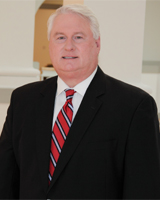